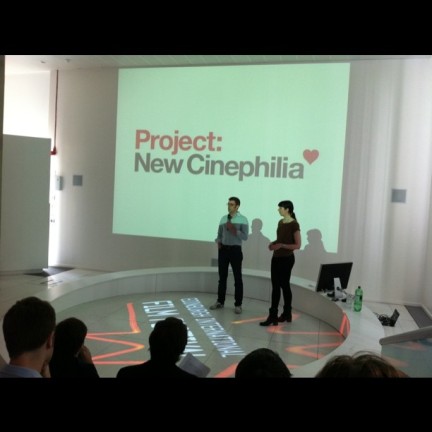 This past summer saw the debut of Project: New Cinephilia, a day-long symposium at the Edinburgh International Film Festival preceded by essays, online discussions 1+2,  sound, video and artwork, as well as a hefty library of cinephilia resources on this website and discussion on the forums of MUBI.

You can find coverage of the symposium from Jeff Reichert at Sundance Now and Michael Koresky at Criterion, as well as a PDF of the PNC Programme Notes here.

As we consider where the project may lead, we’d like to thank everyone who took part as writers, readers, speakers, audience members and forum commenters. If you would like to get in touch you can find our contact details here or follow us on @ProjectNC.

Welcome to “Project: New Cinephilia,” a cross-platform initiative of the Edinburgh International Film Festival open to critics, students, curators, archivists, filmmakers, film-industry professionals, publishers, educators, movie lovers, and the film-curious public. In the weeks ahead, we will publish original essays, roundtable discussions, and film-related artworks by a roster of international contributors. Today, we are proud to debut the official P:NC website, co-published and powered by our friends at MUBI, who will host P:NC-related discussion in their Forums.

When festival director James Mullighan phoned in late December and asked if we would co-curate a symposium on film criticism for the upcoming Edinburgh International Film Festival, we were honoured to accept. He then suggested that we rethink the ossified formats of such symposia—keynote speeches and panel talks—and imagine what could be done differently. How could we create something people would want to be part of, something that would draw the interest of critics and filmmakers and have an educational component as well? We welcomed that idea, and talked through some possibilities. “I want you to reinvent the whole idea of such a conference,” he told us, invoking the iconoclastic spirit that has historically defined the Edinburgh Festival. “Break all the rules.” It was in this hugely ambitious context that the seeds of “Project: New Cinephilia” were sown. Whether we succeed or not depends largely on you—our audience—whom we hope to thoroughly engage throughout the coming weeks. END_OF_DOCUMENT_TOKEN_TO_BE_REPLACED