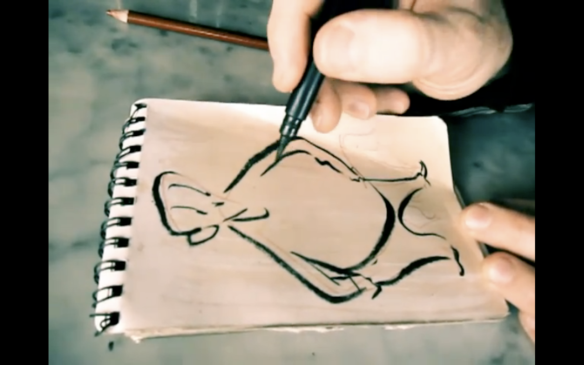 Everyone has a relationship to movies. One of our goals at Project: New Cinephilia has been to invite contributions from artists, writers, and others across non-cinematic disciplines to share with us the ways in which film has shaped or informed their creative practice. At Edinburgh’s Festivalhouse@Teviot on June 16, we’ll be debuting a new exhibit entitled “At the Movies with Marcellus Hall: Illustrations from The New Yorker, 1993-2010.” Accompanying the illustrations are annotations we’ve commissioned from Hall that speak to both his process and, at times, the impact of the films he has been assigned to cover. Below are two pieces that ran in other magazines, three from The New Yorker, and one previously unpublished work, debuted exclusively online by P:NC.

This was for the Village Voice.  I don’t remember what the article was about besides the movie E.T. and the fascination it held for children.  I hadn’t seen the movie at the time, but I had fun with this.  Because the Voice is (was?) a leftist renegade publication, an illustrator is allowed more editorial freedom when working for them.  I always chafed when mainstream publications asked me to make certain images benign.  But one has to pay the rent, right? 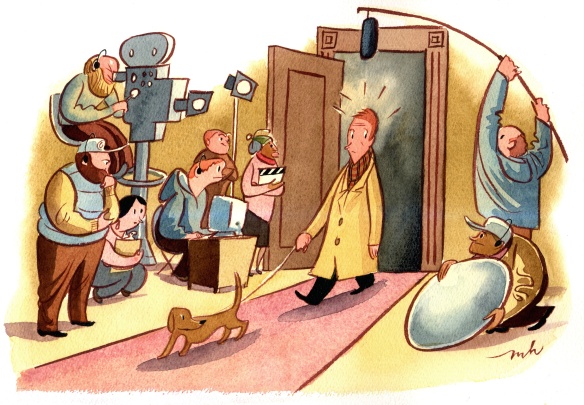 This illustration was for a magazine catering to co-operative apartment and condominium owners in New York.  The article was about how to cope with a film shoot on your street. 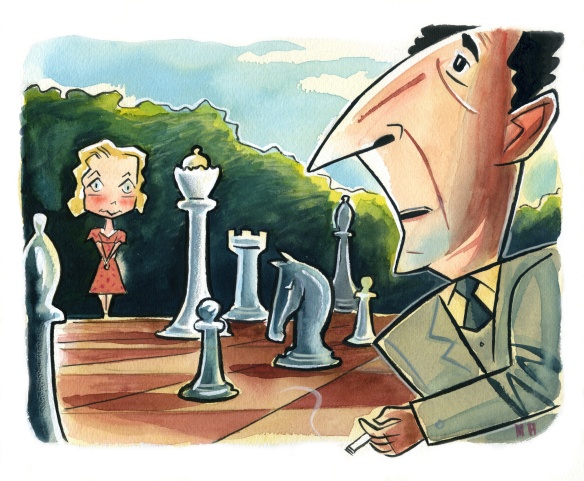 I still possess the VHS copy of this movie.  I might have overdone John Turturro’s nose here.

I like the way I was able to depict the audience in this one with just line.

Feeling confident enough to control a pen nib for an illustration assignment (as opposed to brush, like in most of these examples) is not my forte.  But occasionally I’ll attempt it.  This was uncommissioned and has never been published. 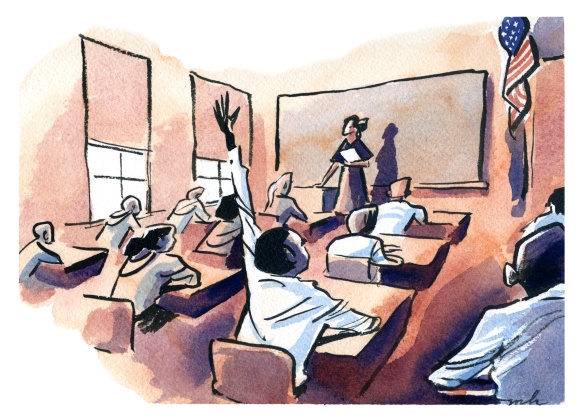 For this assignment I was provided with only a link to the trailer as reference.  I needed to convey something general about education.  I found a photo online of a student with a raised hand in class.  Capturing his gesture was key to this drawing.  Also, I was happy in having successfully limited my color palette.

Marcellus Hall is an illustrator/musician living in New York. His illustrations have appeared in The New Yorker, The Wall Street Journal, The Atlantic, and Time, as well in American Illustration, the Society of Illustrators, and Communication Arts annuals. His first cover for The New Yorker was published in 2005.  Hall has illustrated children’s books for Abrams Inc and Simon & Schuster.  As a musician Hall has made recordings with bands Railroad Jerk and White Hassle and has toured the United States, Europe, and Japan. A solo album, The First Line, was recorded by Hall with accompanying musicians and released on Glacial Pace Recordings in February 2011.