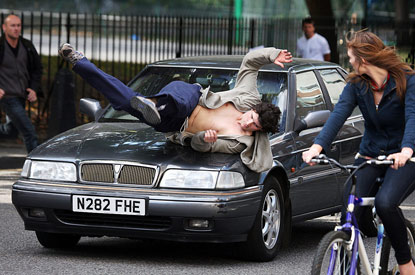 Postcard from Sunderland, by Neil Young

Thanks Andrew (and everyone else – I’m humbled to be in such eloquent company),

Greetings from a wet, grey-skied, chilly Sunderland, on a late May day that looks, sounds and feels more like early November. It’s been raining on-and-off all day, including a massive cloudburst about an hour ago. Likelihood is, when I step out of my front door in 90 minutes or so, I’m going to have to have the hood up on my sou’wester-ish rain-slicker.

My destination: the Empire Cinema in Sunderland city centre, which is a 25 minute walk at the brisk clip which precipitation usually engenders.

My target: the 4.40 screening of Blitz, a violent British cop-thriller starring Crank 2 : High Voltage‘s Jason Statham that received (predictably) mixed-to-negative reviews from the British critics when it opened last week, and which will linger in our multiplexes (late-night shows only) for another week before making the 21st-century version of what Variety used to be called the “fast trip to half-inch”.

And I will make this journey – with lowered expectations but cautiously defiant optimism – instead of catching up with Haneke’s The 7th Continent, Kusturica’s Do You Remember Dolly Bell?, Ti West’s House of the Devil, or any of the other DVDs that have been sitting patiently on my shelves, unwatched, for months or even years. And instead of mastering the art of downloading, thus allowing me to experience the magic of {insert title of esoteric cinephile classic — Pedro Costa’s O Sangue will do!} for the first time.

Insanity? Perhaps. Cinephilia? Surely not. Reading your fascinating contributions over the past few days (and apologies from narrowing the focus of the discussion from the inspiringly general to the solipsistically personal) my initial uncertainty about my cinephile status has hardened – and after reflection I realise that if I’m anything, I’m a “cinemaphile.” Of course, there are aspects of any cinemagoing experience which I can’t stand – and I don’t need to list them here – but for me the appreciation of cinema is inextricably bound up with the whole going-out-of-one’s-way-to-a-large-building-where-strangers-gather-to-stare-at-images business.

I do watch films on TV, which is the medium that really introduced me to cinema (from the age of five to fifteen, a trip to “the pictures” happened once a month if I was lucky, whereas I’d average a dozen or two via the “telly”), and via DVD on my computer or DVD-player, but the latter I associate much more with checking out “screeners” for festival-programming purposes. That’s work. And so, needless to say, is seeing films in the cinema – whether or not I write a review of the movie afterwards, whether or not I’m paid (ha ha!) for that review.

There’s a clear overlap betwen “cinemaphilia” (not a term I expect to catch on) and “cinephilia”, though to answer Mike Everleth’s question about whether one can be a cinephile and never go to the cinema, my answer would be yes… It just not the kind of cinephilia that personally appeals to me – and not just because of the position held by many film-makers, such as (to name but one) Tsai Ming-Liang, that his work can only be appreciated in a cinema setting (perhaps in his case, a cinema that’s crumbling and deteriorating even quicker than flimsy old celluloid…)

And I am certainly not suggesting there’s anything wrong with the comfortable, inclusively generous “home cinema set-ups” which Matthieu refers to. Though I do have to admit, his comment did make me (child of the seventies that I am) immediately think of that exchange at the Los Angeles party in Annie Hall, and which I’ll sign off with now (Blitz is beckoning!)

TONY : and there’s another thing about New York. See … you-you wanna see a movie, you have to stand in a long line.
It could be freezing, it could be raining. And here, you just-
GIRL IN WHITE : We saw “Grand Illusion” here last night. …
Tony and the girl in white leave the room, Annie and Alvy following.
ANNIE : (Taking Alvy’s arm) : It’s wonderful. I mean, you know they just watch movies all day.
ALVY : Yeah, and gradually you get old and die. You know it’s important to make a little effort once in a while.

You will find all related posts in the Online Roundtable 1 .